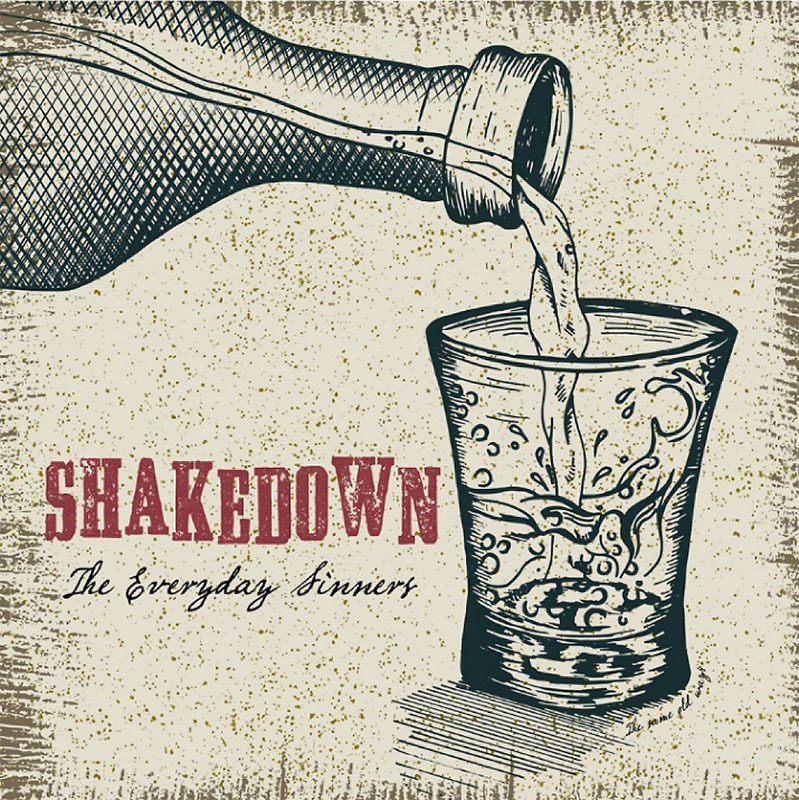 The Everyday Sinners are back with ‘Shakedown’, their first release since 2013’s ‘Lord of the empty Manor’. This is very much an album of its times and a band making sense of both their personal experiences, the current state of the world around them and the whats-whys-and-wherefores of where life is headed. Vinyl pressing taken care of by Cyclone.

As lead -sinner Jack Cade explains, ‘The main underlying theme of the album has been driven by the turbulent times we’ve found ourselves in, the use of divisive politics to set people against people to distract them from the real problems. It also looks at how we cope with life and the ups and downs it throws at us. I didn’t want it to end up an album of protest songs, more a snapshot of life from the last ten or so years.’

The Everyday sinners has been a slow evolution over the last 6 years, having recorded a debut album ‘This Fiery Road’ with friends and session musicians, a live band was initially put together with Adam Perry a drummer who brings both subtlety and power, Mike Muggeridge the driving heartbeat of the band on bass, Jack Cade on Guitar and vocals and various part time members who dropped in and out over the first few years. In 2012 the band enlisted the vivid vocal talents of Helen Muggeridge and in the last year the exceptionally versatile Ben Cox-Smith on Dobro and guitar has become a more permanent fixture having featured on all the album recordings. Finally the line-up has been completed with the arrival of Chris Davies on Piano and Hammond, giving the band the all round sound live that they get with their recorded work.

The album is released on an initial limited run of vinyl and streaming services only. There will be 5 artists producing artwork for the screen printed covers, with each artist being available on only 50 covers.

Belly Full A Fire – Call to arms for people to stand up against bigoted views and make your voice heard.

16 Tons – cover of the Merle Travis song about miners trapped by their working conditions, they got paid and then had to pay back to the mining company for their lodgings and had to buy food at inflated prices from the mines store. They were perpetually trapped.

Howlin’ at the moon – I was at Reading Festival years ago, there was a full moon and people, drunk after a day of watching music, started to howl on one side of the site which then spread across the site as the full moon rose.

You were the ammunition – Relating how hateful, misguided views can be whipped up and used by any one person or group to drive a political agenda – We’ve seen it throughout history and most recently with UKIP, Le Pen, Trump, Tories etc.

Roll with them punches – Based on something my grandad used to say, life throws all sorts at you but you have to take it and find your way through.
www.jackcade.com