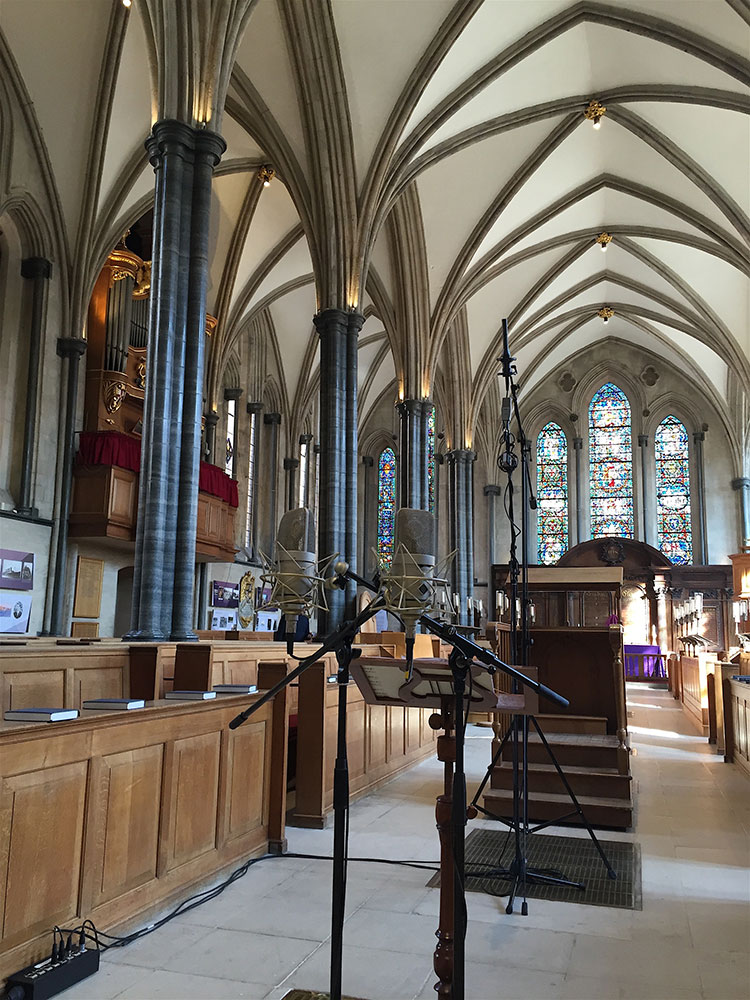 June/ July 2016 saw Cyclone’s Nick Sheridan and Graham Semark on location at the historic Temple church in London recording the Temple Boys Choir for a new CD release prior to their Australian tour.

Cyclone provided all of the equipment to set up a temporary studio in one of the churches ante rooms and used various microphone set-ups to capture the unique sound of the choir and the ambience of this fantastic location. Live harp, piano, saxophone and the famous Temple “Interstellar” organ were all on the bill for this amazing project!

Using a combination of AKG, Royer, Neumann, DPA and Audio Technica microphones feeding into an S16 digital snake, we ran the mic feeds back to a temporary ‘control room’ 30m away where an X32 mixing desk and Logic Pro X system took care of the recording for us. Using a pair of Munrosonic Egg 100 monitors gave us an exceptionally accurate and high quality reference to ensure that the producer and musical director were happy with the sound being captured.

Recording in a church, and it’s highly reverberant space, has its challenges (not least the sound of helicopters which are a fixture of the London air space!). Getting microphone placement right is key to capturing the sound of the choir, the instruments and the natural reverb with enough separation so that all options are available for the mix – which will happen later in our post production studio, back at Cyclone headquarters!

A Royer SF24 stereo ribbon mic and 2 AKG 414’s configured as an M and S pair were placed behind/ above the conductor to capture the overall balance of the choir, with a pair of Neumann 149 valve mic’s in the centre to capture a closer sound and give us the ability to ‘spot’ the soloist’s. A pair of AT 4033 microphones were used for both the piano and the organ, with 4 DPA 4006 mic’s making a fantastic job of capturing the harp and overall ambience of the church.

Working with the Munrosonic Egg 100 monitors was fantastic, giving us a lot of confidence in knowing exactly what we were taking to the mixing sessions ahead. They are so smooth and transparent, with incredible detail and stereo imaging.

After three days on location, mixing and editing was completed during 9 sessions at Cyclone’s mastering studio before international release on the Orchid Classics record label.

The CD went on to receive a 4 star review in the Guardian later in the year.FacebookTwitterEmailMore